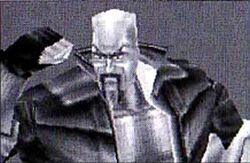 Dr. Zeng is the main antagonist in the first Fighting Force. He is Alana McKendrick's stepfather. He is also a former government agent. His first name is Dex.

Over the years, he developed a megalomaniacal complex that has been suspected to be caused by the use of synthetic drugs he's made for the government and tested on himself and other family members, such as Alana.

Dr. Zeng thinks he's keeper of the Earth, the father nature, and the chosen one. He thinks that anyone in his presence should bow before him as he thinks he is a god himself.

When the millennium year 2000 hit, he thought the world would end, but nothing happened. Filled with outrage intensified by the millions of partyers and rioters that surround him, Dr. Zeng insists that something went wrong. He knew from his years of reading, teaching, and hypothesizing that the world was supposed to end.

He had a plan if an error would happen if the world didn't end in 2000. His plan was to fix the Apocalypse and to force it to happen to correct the malfunction.

Dr. Zeng now believes that it is his job to stop the world and end it, with the help of biological warfare devices and several militant followers, as well as his connections in the Underground. One of Dr. Zeng's lab assistants, Snapper, can no longer stand this man's corruption and calls a friend for help stopping him.

At the end of Fighting Force, he is sent to jail and is seen in the ending in his prison cell.

Retrieved from "https://fightingforce.fandom.com/wiki/Dr._Zeng?oldid=4352"
Community content is available under CC-BY-SA unless otherwise noted.